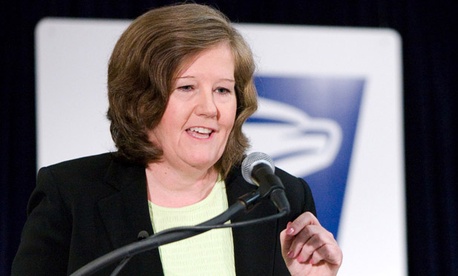 The USPS has announced that Postmaster General Patrick Donahoe has decided to retire in February of next year, after 39 years with the Postal Service.

At a public meeting Mickey Barnett who is Chairman of the Board, called Donahoe “a visionary leader who worked tirelessly to move the organization forward during one of its most difficult periods”.

Replacing Donahoe will be Megan Brennan, the current COO of the USPS and will become the 74th Postmaster General.

Speaking at a public meeting of the Board, Mickey Barnett, praised Brennan who will become the first woman to be Postmaster General as the ideal choice to replace Donahoe.

Currently as Chief Operating Officer, Megan Brennan is responsible for the day to day activities of over 491,000 employees working in more than 31,000 locations supported by a fleet of more than 200,000 vehicles. She is responsible for all Postal Service operations, including mail processing, transportation, delivery and retail operations.

Congratulations to you Megan!